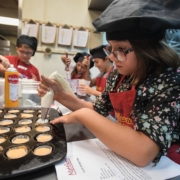 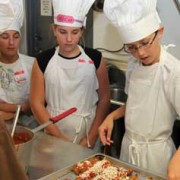 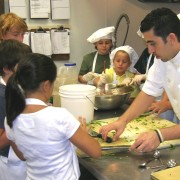 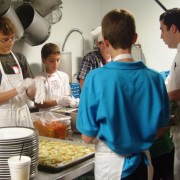 Mattison’s Summer Chef Camp teaches kids 10-12 how to use fresh, local ingredients to prepare meals for themselves.

Children crowded around tables in the back of the kitchen at Mattison’s Forty-One. Each was focused on frosting bite-sized cupcakes.

“I made swamp-green icing,” one of the young chefs said. A few others sampled their work by squeezing icing directly into their mouths.

They were all participating in Mattison’s Summer Chef Camp. For the past 10 years, Mattison’s Forty-One has opened its doors to teach children how to use local, fresh ingredients to cook meals for themselves. Paul Mattison, who owns the restaurant and works as a chef there, started the camp out of his enjoyment of teaching young people about nutrition.

Some of the children, aged 10 to 12 years old, had registered for the summer camp weeks in advance through the Sarasota County Parks and Recreation department. The campers usually occupy the restaurant from 8:30 a.m. until 11 a.m. Vazquez describes the summer camp as one of the most fun parts of his job. As Mattison’s slows down over the summer, he stays busy teaching kids how a restaurant runs.

These children were enrolled in Basic Chef Camp, a one-week program that ended Friday, during which they learn basic knife skills and how to gather, mix and measure ingredients. Surprisingly, most of the children said that cooking — not eating — was their favorite part of the week.

During the week, the campers made quiches, meatballs with fresh mozzarella and salad with sauvignon blanc dressing.

During Friday’s graduation, the young chefs were given the opportunity to serve two guests a meal of basil pesto, marinara and white pizza, along with salads and cake. More advanced cooking techniques, such as sauteing, grilling and braising, will be taught during another camp, July 8-12. Heidi Napolitano, an executive assistant at Mattison’s Forty-One, said some students return every year that they’re able to.

Spots are still open for the three remaining camps, and enrollment deadline lasts until the day before each camp begins, or until the camp is full. Eighteen students are able to enroll in the chef camps, and there is space for 14 in the pastry camps.

Before they broke off to clean dishes, Vazquez gathered the 18 children around a table. All of the young chefs were wearing black chef hats and red aprons with the camp’s logo embroidered on the front.

Some of their cupcakes resembled the Leaning Tower of Pisa with frosting layered precariously high. Others were modeled after Thanos, the villain of recent Avengers movies, with purple frosting and sprinkles that matched the stones on his gauntlet.

“Everybody’s personality comes out in their cupcakes,” Vazquez said. “Every cupcake is different. Every cupcake has its own personality, and that’s all right. That’s a good thing.”