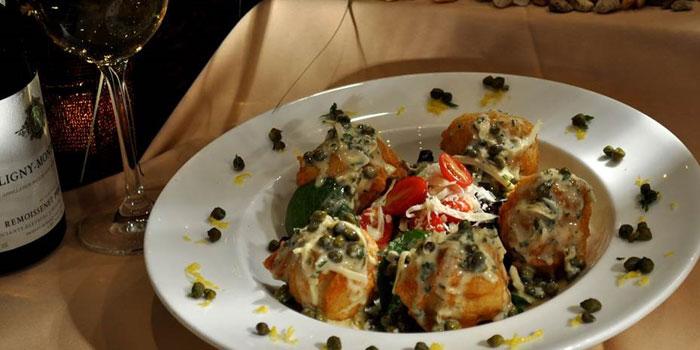 Combine the flour, salt and pepper, and lightly coat all sides of the meat. Shake off any excess. Save remaining seasoned flour for use later in the gravy. Heat 2 tablespoons of oil in a large skillet. Add the meat and cook over high heat, turning once, for 1 to 2 minutes per side until browned. Do not crowd the skillet or the meat will not brown. Remove with tongs and add the remaining oil to the pan drippings. Add the onion, celery and carrots, and cook over medium-high heat for 2 minutes, stir occasionally, until lightly browned. Reduce heat to low, cover and cook for 10 minutes until the vegetables are almost tender. Add the garlic and sprinkle with the reserved flour. Cook and stir one minute. Add oregano, tomatoes with their juices and the wine. Return the meat and any juices to the skillet. Bring to a simmer, cover and cook over low heat for 20 minutes or until meat and vegetables are tender. Season to taste. Make the Pasta Dough, fill and cut 3-inch square ravioli. Cook in boiling water 4 to 5 minutes until they float to the top. Serve with Cipollini Onion Cream and garnish with Caramelized Cipollinis.

Cook the onions in the water with the butter and sugar in a large sauté pan over high heat. As the water reduces, the onions will caramelize. Toss occasionally and cook until golden brown.

Simmer onions and cream in a medium saucepan until thickened. Purée in a blender until very smooth. Strain through a very fine sieve and season to taste.

Cook the onions in the water with the butter and sugar in a large sauté pan over high heat. As the water reduces, the onions will caramelize. Toss occasionally and cook until golden brown. Garnish with thyme sprig.

Using an electric mixer fitted with a dough hook, combine the flour and salt. Add the eggs, one at a time, and continue to mix. Drizzle in the oil and continue to incorporate until a ball is formed. Sprinkle flour on your work surface and knead the dough until it is elastic and smooth. Wrap in plastic and let rest for about 30 minutes, allowing the gluten to relax. Sprinkle flour on your work surface and on the dough. Form it into a rectangle and roll it through a pasta machine several times at the widest setting. Roll through several more times, reducing the setting each time until the dough is thin. Cut 3-inch square ravioli.

More recipes in the cookbook Chef! The Stories and Recipes of Chef Paul Mattison.
Order Chef! online, purchase at Mattison’s Forty-One, another local retail outlet, or purchase E-Book on Amazon.com